Since we humans first mastered the art of fire making, there have been many advances and changes to the most commonly used methods.

Over time the average member of society has gone from relying on friction-based and hard-to-master methods, such as the fire drill, to using matches, lighters and other ultimately chemical means of fire making.

For those of us who wish to preserve the lifesaving skills that our ancestors held so dear, and yet still have in our possession a reliable and easy way to make fire, there is a middle ground.

This golden middle is occupied by a trusty fire making tool kit known as flint and steel.

Why not give this clever method a try and bring back some of the romance of the outdoors by going back to basics and being truly at one with your surroundings?

Why Use Flint and Steel?

The use of flint as a versatile material for tool making has been part of human nature since our species first emerged, so it was only a matter of time before flint was put to use to facilitate the propagation of one of the most quintessentially human of skills: the ability to light and control fire.

Steel, on the other hand, is a relatively new raw material when compared to the primordial use of flint and other stone tools.

The dawn of the Iron Age eventually led to the discovery of steel, the carbon content of which led to the production of instruments which were far more durable and less brittle than simple cast iron tools.

The fire making potential of the sparks produced by striking a piece of flint with a flat piece of steel was not lost on our crafty ancient ancestors.

Though the sparks produced are of a lower temperature than those made by firesteels, over millennia, our forebears developed the sequential flint and steel fire making approach to such a degree that it quite literally became child’s play.

Even up until a century ago, young children were expected to be able to start a fire to keep themselves warm and safe from animal predators while out in the wilderness.

While this is no longer the case today in many parts of the world, those of us who enjoy practising bushcraft and other outdoor skills can certainly appreciate the ingenuity of our forefathers.

As with many ancient tools, we might be forgiven for thinking that it is no longer possible to get hold of a freshly made high-quality steel striker for use as part of a flint and steel kit.

Fortunately, such an assumption is incorrect.

Despite the ancient origins of these tools, some blacksmiths have preserved the art that is the production of handmade flint and steel fire making kits.

In fact, had they not done so, steel strikers would essentially have become extinct as fire making tools.

Attempts at mass production have shown that it is simply not possible to maintain the necessary high standards required for the production of reliable and easy-to-use flint and steel kits.

When it comes to fire lighting, handmade is king.

Some blacksmiths have gone a step further and have developed their skills to such a degree that they exclusively produce flint and steel kits, including all of the materials you need for preparing tinder and kindling.

One such craftsman works for Flint and Steel, a company which puts together the finest range of handmade flint and steel fire making kits available on the market today.

Such a kit makes a wonderful gift for anyone with an interest in the outdoors, from experienced hunters to novice Boy Scouts.

Perhaps the best flint and steel kits are those which combine the ancient knowledge of our forebears with some slightly more modern innovations.

While many natural materials can be used as tinder in their raw as well as processed forms, nowadays one of the most reliable materials in use is commonly known as char cloth.

This term describes pieces of cloth, such as cotton or linen, that have been enclosed in a container and subsequently scorched by exposure to heat.

Despite the excellent properties of char cloth, it was not used during the medieval period or in previous epochs. This wasn’t because we had not realized the potential of such materials, but rather because textiles were expensive and hard to come by for common folk.

It would have been criminal to waste such a precious resource at the time! It was only at the dawn of the industrial revolution that textiles were commonplace enough to be used as an easy source of tinder for fire making.

Even with the apparent superiority of char cloth, the beauty of the flint and steel fire making approach is that you can opt to use whichever kind of tinder you like.

The step-by-step process remains the same, no matter which materials you use.

In areas where birch trees are prevalent, such as the forests of Northern Europe, certain species of birch bark fungus would have been used.

These and other fungal species are great for holding an ember for long period of time, and you can even transport them with relative ease for future use.

One of the major advantages of flint and steel kits lies in the fact that the tinder remains in close contact with the flint at all times while being struck by a steel striker.

This gives a very high success rate when it comes to sparks hitting the tinder. With a bit of practice, you’ll be able to produce an ember in a matter of seconds.

Where Can I Find the Best Flint and Steel Kits? 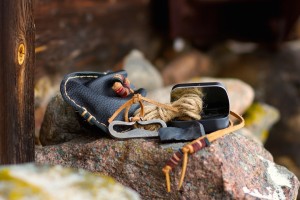 The Flint and Steel company was founded on the back of generations of experience, passed down from father to son up until the present day.

Only natural and environmentally friendly methods of production are used to produce every aspect of their flint and steel kits.

Their dedication to helping you learn to make fire knows no bounds.

Each of their flint and steel kits comes with thirty pieces of char cloth in their own metal tinderbox. You can even use this box to make your own tinder once you’ve run out.

You are also provided with plenty of natural jute twine for use as a great source of kindling. Each kit comes with step-by-step, illustrated instructions, making for a stress-free and easy-to-follow introduction to the flint and steel way of fire making.

As if this wasn’t enough, you can find all sorts of tutorials online, made by the Flint and Steel blacksmith himself.

When such superior tools and materials are used alongside the finest flint from minerals beds across Europe, you end up with a flint and steel kit that is perfect for reliable and quick fire lighting.

There is no better gift to give than one that teaches a skill, and there’s no skill that will serve you better in the woods than fire making.

If you get a flint and steel kit for the outdoorsman or woman in your life, you’ll be giving them the gift of warmth at night, protection from wild animals, and a kitchen, all in one.